A Home For The Holidays

Nel called me the other day with a cute story, and I'd like to share it with you.

Nel saw a bear on the street while driving in town, and it was getting run over by cars.  She had to stop and save him, so she picked him up, took him home with her, and gave him a good bath.  He was missing eyes and a nose, so she made him some new ones out of a pearl bracelet she had.  She found him a scarf, spritz some perfume on him, and he joined the bear family.   So, now he has a home for the holidays. 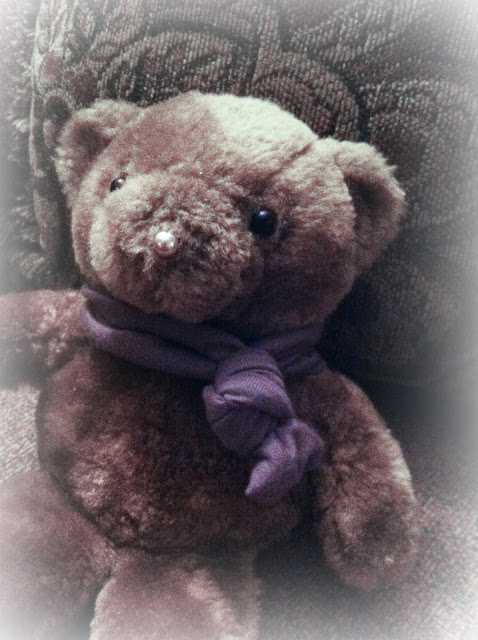 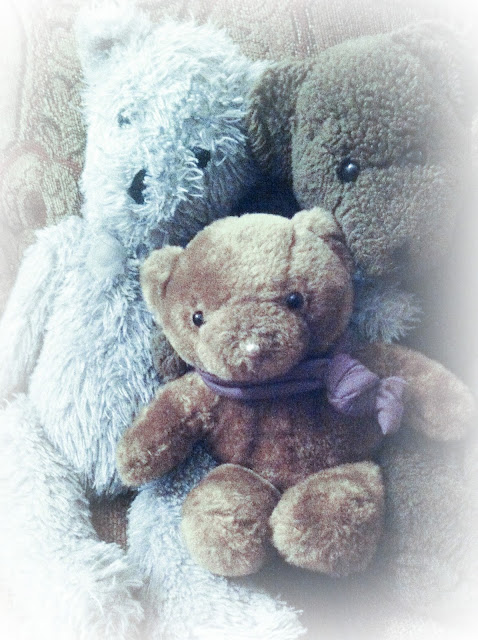 She calls him
Rescue Bear for now,
but if you have
any suggestions for other
names, we'd love
to hear them.
~Sheri﻿
Posted by Red Rose Alley at 6:00 AM

Another great history for the Teddy Bear Myths that abbound the internet:

I suggest you this TED event:


I believe from time to time brave and lovely souls, extraordinary souls, rule the Earth. Nel is one of these lovely persons.

Be Well. Keep the blessings and being a bless to all, Nel. Thank you for sharing Sheri!!!

How lovely! I love teddy bears sooo much!
Hope you have a wonderful countdown to Christmas girls!
Happy new week
Olympia

What a nice thing for Jess to do! I love how she spruced him up. The pearl nose is adorable. If he were a girl bear, I'd name him Pearl. But since he's a boy--ummm--maybe Nelson after his mama. ♥

What a nice thing for Nel, to do I meant---sorry.

Sheri, That is such a cute story about Nel. The bear looks very good for what all he went thru. I would call him Brownie. Blessings, love you, Susie

Oh Sheri, this is just precious! I am so glad your sweet daughter rescued this darling little bear and I'm ever so glad he has a home for the holidays {{smiles}}

Much love to you, my friend!

Sweet story of Rescue Bear. You could call him RB for short.

What a lovely story. Such a sweet little bear, somewhere a little child is wondering where his/her lost bear is. Could she put a picture- notice on a post near where she found it, saying it's safe and sound and a contact number. That would really make a happy ending.

Every home should have at least one teddy bear ... out shopping earlier today, I happened to get into conversation with another 'Grandma' who was making an important purchase for her new grand-daughter. Can you guess what is was?

I think 'Rescue' suits the lovely bear featured here, he is adorable.

Have a lovely week

All the best Jan

How sweet! We have an old bear that's a little worse for wear and we call him Boo Bear. It just seems to fit. Holiday hugs, Diane

Sheri,
A beautiful story that touched my heart. Tattered and torn, sewn with a pearl to be reborn. Jess has a sweet soul.
xoxo,
Vera

I was getting into this story about a REAL bear. You had me there. Cute!

A very sweet story and how lovely Nel rescued the bear and gave it a new lease of life. The bear is adorable
Hope you are enjoying the week
hugs
Carolyn

A lovely sweet story, Sheri, and I love the pearl as a nose. I see someone else has also suggested this, but my first thought was to name the bear Pearl! xx

This warms my heart and makes my day. I always feel so sad if I see a toy on the road, bears deserve to have a loving home. I'm happy he's with those who love him now.

OH MY GOODNESS, when I started to read this, I thought she saw a REAL BEAR...and when you said it was getting run over, I thought, "WHAT CRUEL DRIVERS TO RUN OVER A LIVING CREATURE!" hahahahahhaahah

What a darling, sweet bear. Oh Nel, what a dear girl! Nope, I wouldn't change the name. He is perfect as is. SWEET!

Sheri,
This is a most precious Christmas Tale of taking care of those who need it the most! Reminds me a little of Corduroy too and the happy life that he ended up having being loved by a little girl!
Sending you wishes for a perfectly delightful week,
Love,
Jemma

He's adorable! What a sweet thing for her to do!

I'm so glad that sweet little guy was rescued! I have always thought of stuffed animals and dolls to have feelings (crazy, I know) and when I was little and still today, I do not like seeing them being abused by children or adults. How about "Homer"...since he has found a forever home? :)

What a sweet little story! I hope she finds a good name! Tar Baby comes to mind....Hugs xo Karen

What a sweet story and a cute nose.

Thanks for all your suggestions. I'll tell you if she decides to change her bear's name. :)

Such a sweet story ~ thank you for sharing! Perhaps the bear is a girl? She could be Noel or Holly! Nel * Noel