Before my brother-in-law left for his travels, he asked if I wanted to meet up at the Chinese Restaurant in town.  My son joined us, and the food was delicious, as always.  I usually get the chow mien, but I think next time I'll get the kung poa chicken dish my son ordered, it was so good. 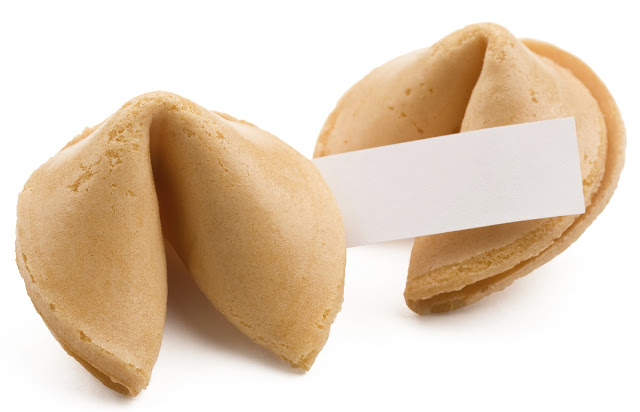 My son made hot chocolate coffee one day, and it was surprisingly tasty.  I had it with cinnamon raisin toast and butter. 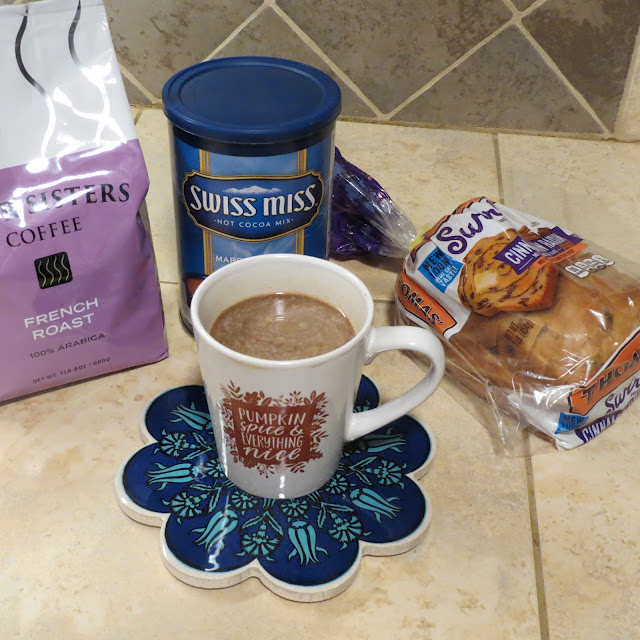 One of the most sincere forms of respect is actually listening to what another has to say. 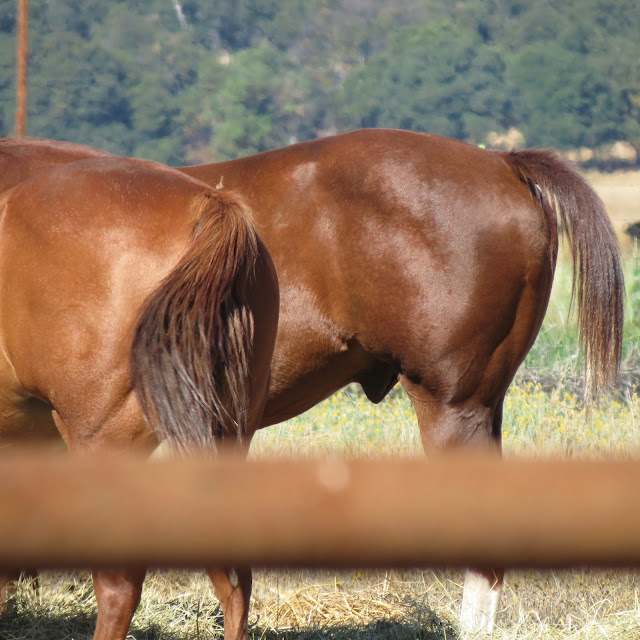 When I drove to the creek, I thought I saw something in the brush ahead of me.  It was three deer - a mama and her two fawns! 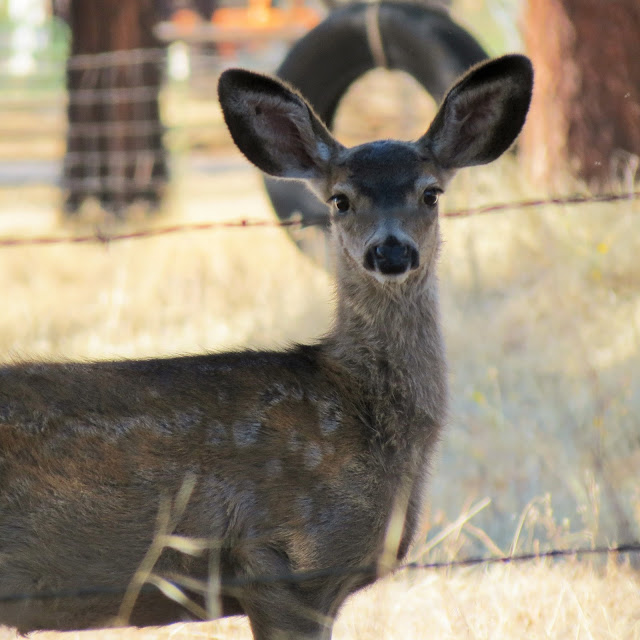 As I got closer, I got my camera out, slow and steady.  One of the deer was sitting on the ground in the shade.  I think it was the mother.  I just sat there quietly and looked at her and took some pictures.  She didn't move for a long while, and she was so calm and peaceful, just staring at me the whole time.  She was the prettiest deer I had ever seen. 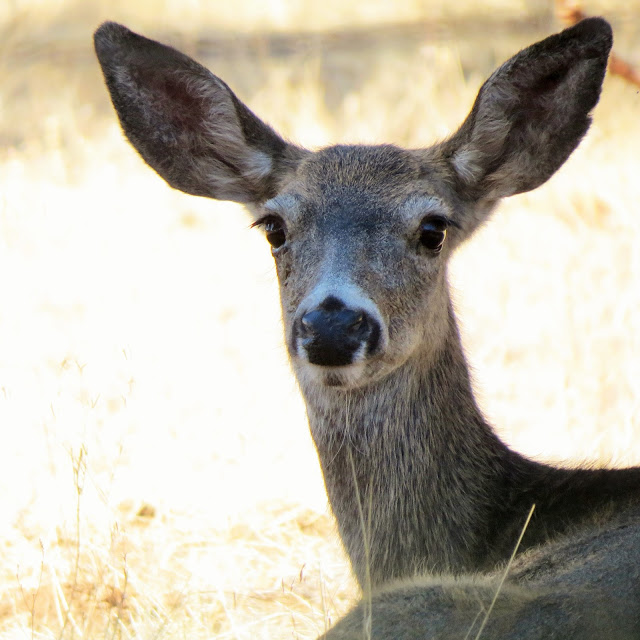 Then, after a few minutes, they trotted off.  It was a special moment, indeed. 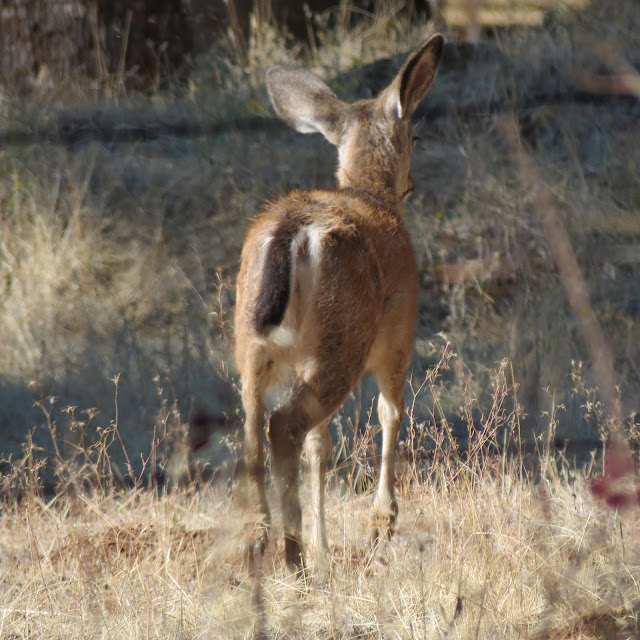 When my brother found this house, it had a good size front porch, and I was glad about that.  I've had porches before, but they were always small and not much room at all.  I found some white rocking chairs at Home Depot that I want to get sometime, but for now, a perfect orange pumpkin on the front porch suits me fine. 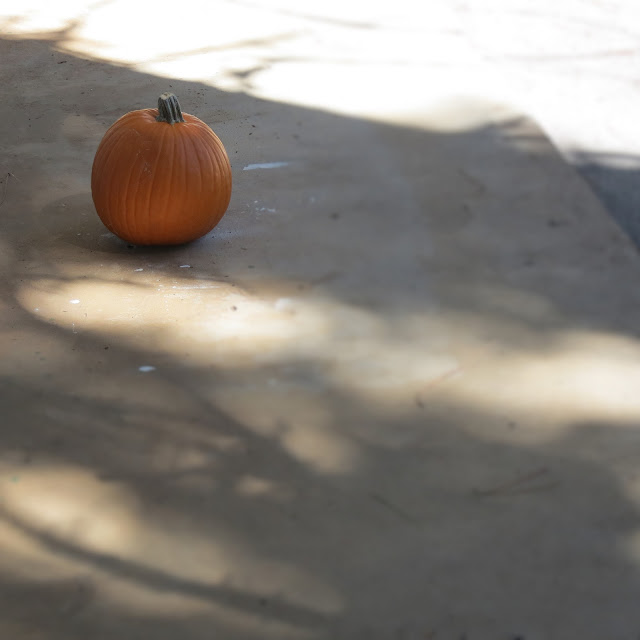 This bird is exotic looking and very pretty, but they are a nuisance at the same time.  They peck at my tree, under the eaves, and even at the electrical post in the front of my house.   I try to shoo them away, cause the last thing I need is to have the power cut off because of this mischievous bird.  But they sure are funny to watch. 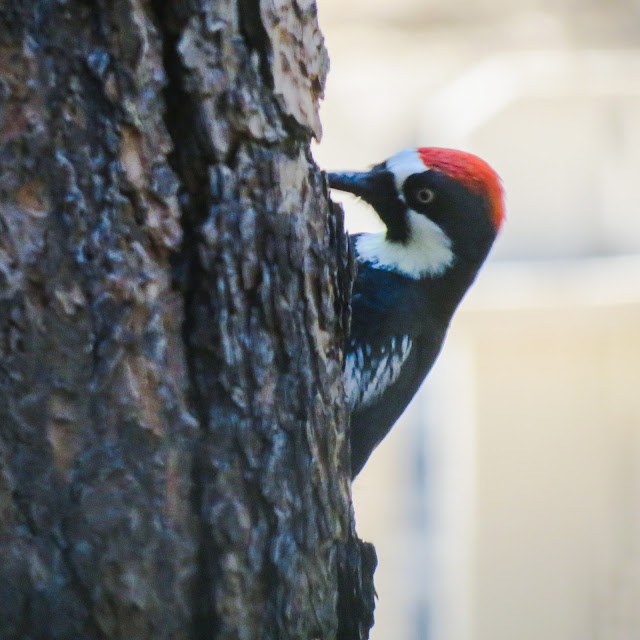 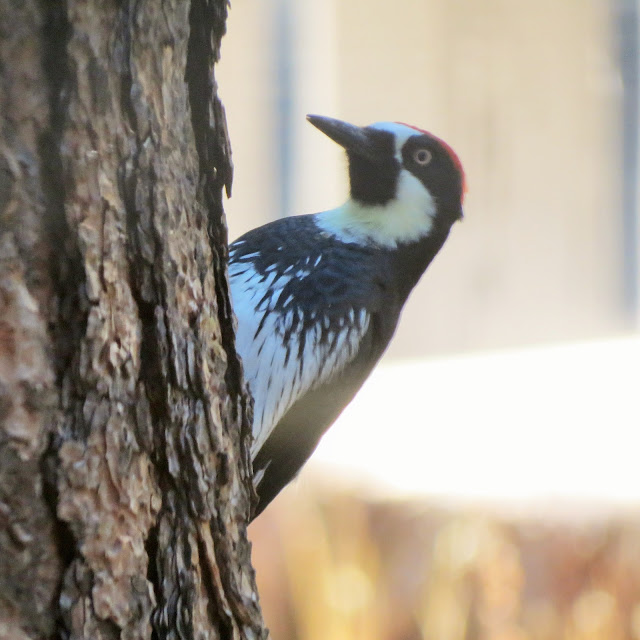 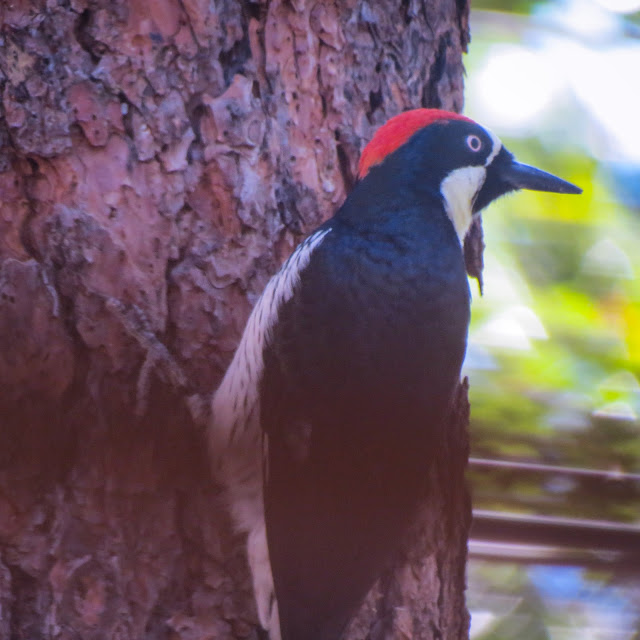 I baked a spaghetti squash, and it was a good, healthy meal. 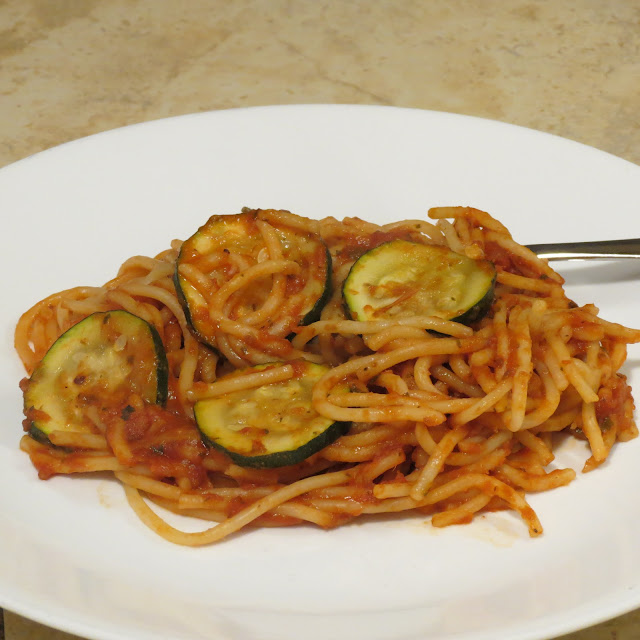 My son brought me a couple Starbuck's iced coffees one day.  I don't really care for iced coffee, so I heated mine up.  Much better. 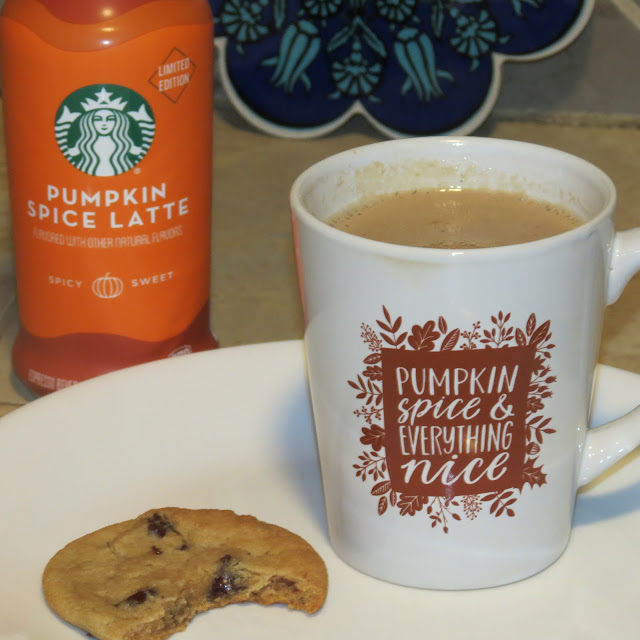 Jess' birthday is this week, and she usually celebrates her birthday all month haha, so I thought I'd throw in this picture for her to wish her a happy day.  I love you Yummy. 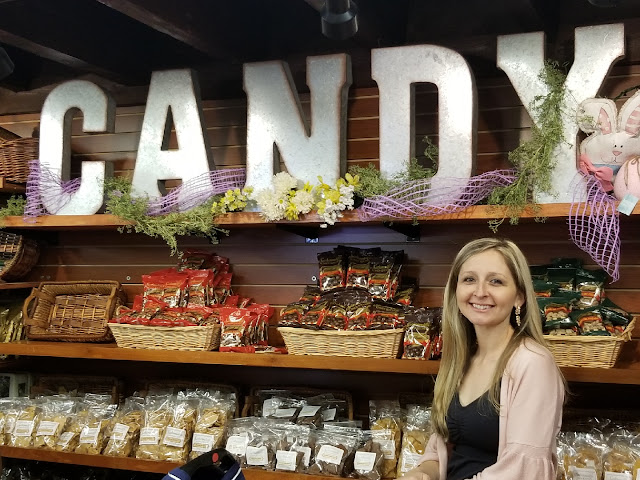 The word LISTEN has the same letters as the word SILENT.

I hope pleasant surprises come to you this month of October.

Listen and silent, a good observation!

What a lovely animals;-)

What a fun, juicy post, Sheri! I love your updates. What a gift to spend time in the presence of those deer. How beautiful and the photos are lovely. I really like her sweet bit of white on the nose. And don't worry too much about the woodpecker unless your house is wood. It shouldn't be too bad and I especially wouldn't worry about the electrical. They won't be near the wires and the poles are built to last far worse than Woody!

Hello, my lovely friend! Such a beautiful, cozy autumn post. Your photos are amazing. And you know how much I love coffee! Happy Birthday to your girl! Have a cozy Monday!

Your coaster is beautiful! I don't like iced coffee either, but I did find one kind I like. The iced mocha at Starbucks. Wonderful deer shots, and she IS just perfect. What an inspirational moment! A big beautiful woodpecker. We had a Yellow Bellied spasucker totally destroy our huge Maple tree in the front yard. He drilled hundreds of holes all over it. Wish we had a porch, I miss the one from my childhood.

Such a sweet post, Sheri. Love your encounter with the beautiful deer. A special time for you to enjoy this October! And you know I love seeing your woodpecker. We don't have that variety here on the east coast. I hope your daughter enjoys a whole month of celebrating her birthday! October is a special month in our home as well. I haven't picked up a pumpkin yet and you just reminded me I want to get one soon. Love your pumpkin on your porch. Happy October to you, Sheri!

Good afternoon.
So, you like Chinese chicken - i like the Mongolian beef. ☺ The fortune cookies are fun.
I love cinnamon toast and butter - I bought the KerryGold butter and it is gone already. Does have a slightly different taste.
Those deer were beautiful, and it looked like they trusted you.
Was that a woodpecker? We had them at the house and they can do some damage.
I have never put zucchini in spaghetti - but it looked good.
Hey, I posted for the first time in two years this am!!
Love, sandie

Sweet post as ever. I do love chinese food. The woodpecker remind me my childhood watching it as a cartoon on tv! I can hear its laugh"

Our house used to have cedar wood shingles and those woodpeckers loved it. They would peck at it all hours. We finally changed the siding. Silent and Listen.. hum, I'd never noticed that.

What a beautiful post Sheri! Full of nature and happiness! Happy Birthday to Jess! Wishing you a wonderful October my friend!

These are great photos! It sounds like you have had some lovely get-togethers with your family. I haven’t had any Chinese food in ages, way overdue, and I love Kung Pao Chicken. You have given me some great ideas as the hot chocolate with cinnamon raisin toast and butter sounds divine. Your encounter with the deer was magical and what incredible eyes, and such a sweet face. I was curious about your woodpecker as it is different to any of the ones I have seen here. It says it is an Acorn Woodpecker. I have never seen one. I would love a front porch. I was going to get chairs for the deck out back but I guess I will leave it until next year now. Yum on your spaghetti squash and your coffee and cookie made me want to get a cup and a cookie, but the hour is too late. I have rattled on long enough so I will end by wishing Jess A Very Happy Birthday! Loved the quote! Happy week to you Sheri.

I find that woodpecker to be beautiful, we do not have that kind of woodpecker here in Wisconsin. I do understand how frustrating they can be at the same time,they do the same things you describe to our home.
Happy Birthday to your sweet girl!
Love,Carla

Your woodpecker is beautiful and hard at work finding bugs to eat. I had not realized Listen and Silent have the same letters; one year I chose Listen as my word for the year as it is so important. Prayer and Listen work well together.

Good morning dearest Sheri! Listening to you through your daily encounters is a pleasant experience. I take it you are well and are enjoying the autumn fall!

I enjoy meandering through your life and enjoying the simplicity of your days.

While reading through your post I was smiling, I always smile at what I read....but my smile got bigger when I saw that loaf of bread by the hot choc....I LOVE THAT BREAD. I was interested in the horse butts! lol...Do you know that if a cat stands in front of you or walks and stops in front of you showing them their butts, that shows they love you. LOL

What a sweet and lovely post…that deer is amazing….you live a good life…I am so glad you do….I hope someday my life will filled with all good things…..I put all my worries in gratitude…and that helps me a lot….keep looking to the little things in life 🍀🍀🍀🙏and always be grateful 🙏🙏🙏 love from me and Leaf 🍀🐾💗🍀

Lovely post, Sheri. Imagine you sitting and looking at the lovely deer! The chocolate coffee sounded good, too. You always take such nice photos and have sweet insights into your life. Thanks for sharing!

I love your updates, Sheri.🌹

I always enjoy your beautiful photos.

What an amazing encounter with the deer!

Hello, Sheri! I like your blog and want to follow. I'll be happy if you want to follow me too. :)
this is my blog; Mor Düşler Kitaplığı

Love your quotes on listening.
Your children sure do treat you special, how lovely!
Loved your nature pictures too.