We had our second snowfall, and it wasn't as deep as the first, but still so pretty.  I am amazed when I see the snow, as I didn't get to see it for so many years.   And, this time I got to watch it slowly fall from the sky.  The last time, it fell during the night and when I woke up, my front yard was covered.  It's Lent season, and we do not eat meat on Fridays.  I had some fish and chips at a little eatery right down the street, and it was Yummy.  They give you big portions, and the food is really good.   The birds are starting to come around now, and sometimes I see groups of them in my front yard.  Since I moved here, every now and then I hear the sound of an animal in the distance.  I thought it might be a moose or a reindeer (not that I know what a reindeer sounds like).  I asked my neighbor, "what is that animal sound that I'm hearing?"  He said he doesn't hear it, but then shortly after he said, "Oh, there's a *** farm a few miles down the road, maybe that's it."  Sure enough, when I went for a drive, I saw the distinctive animal that I often hear.  It's not bothersome at all, and can only hear it faintly, and I'll surprise you with it later on.  Nel and Jess celebrated Mardi Gras, as they do every year.  They just love this holiday, and always make it a fun day with the festive colors, masks, beads, and King cake.  I've been drinking peach tea lately, and I like its fruity soothing taste.   I've been exploring areas in this mountain town, and getting to know my way around.  I am at peace here.  Thank you, again, dear brother. 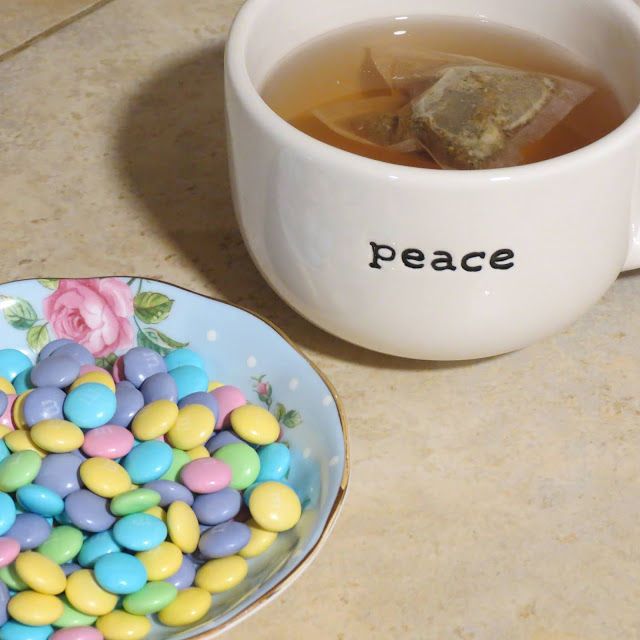 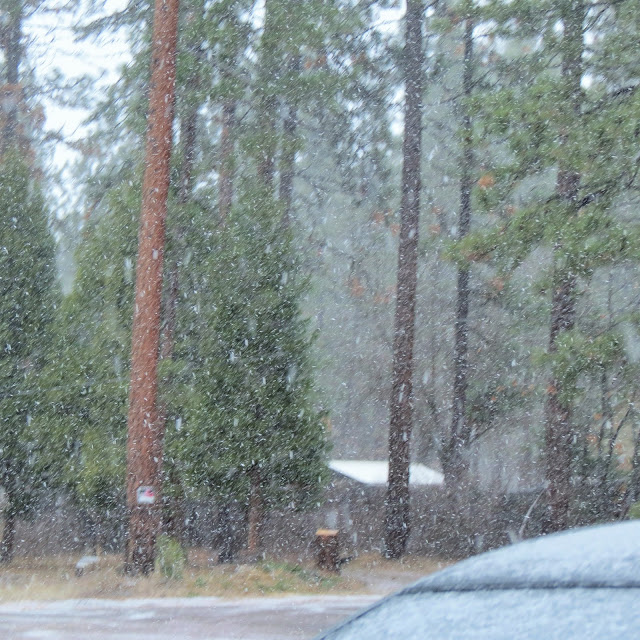 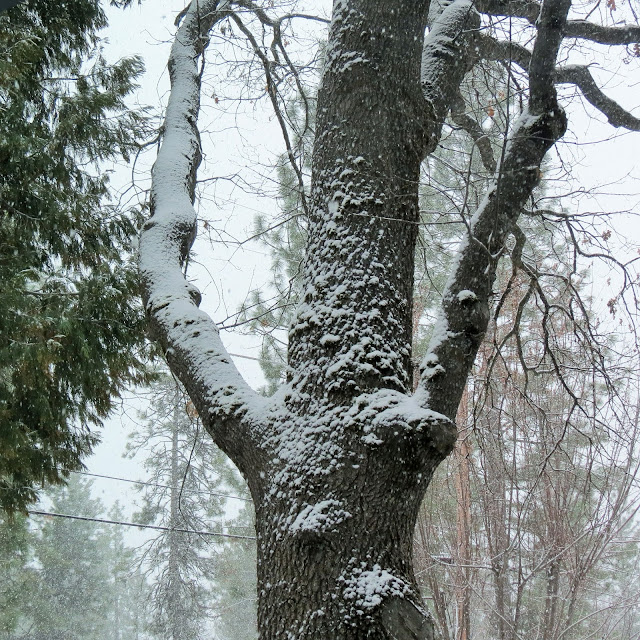 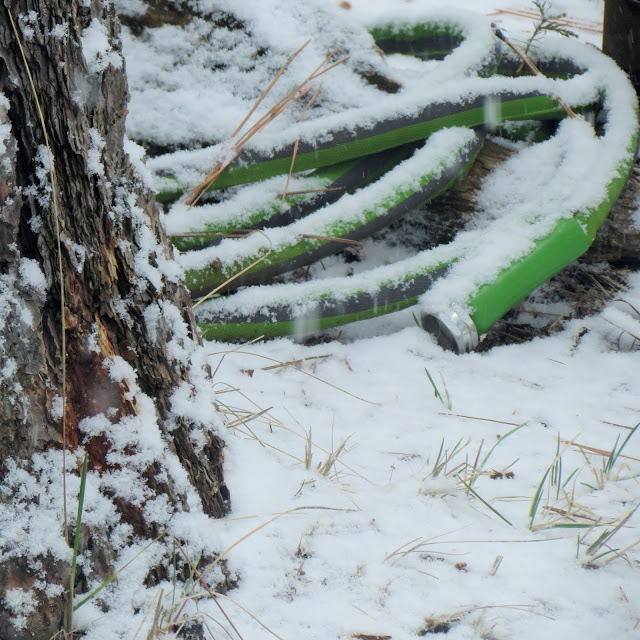 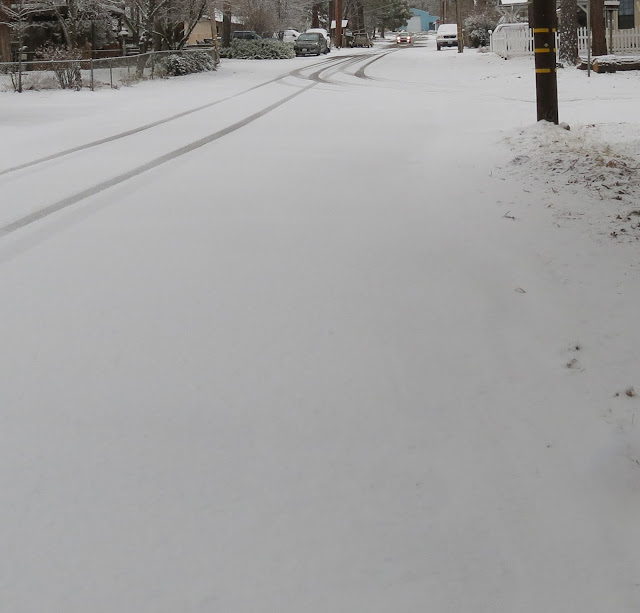 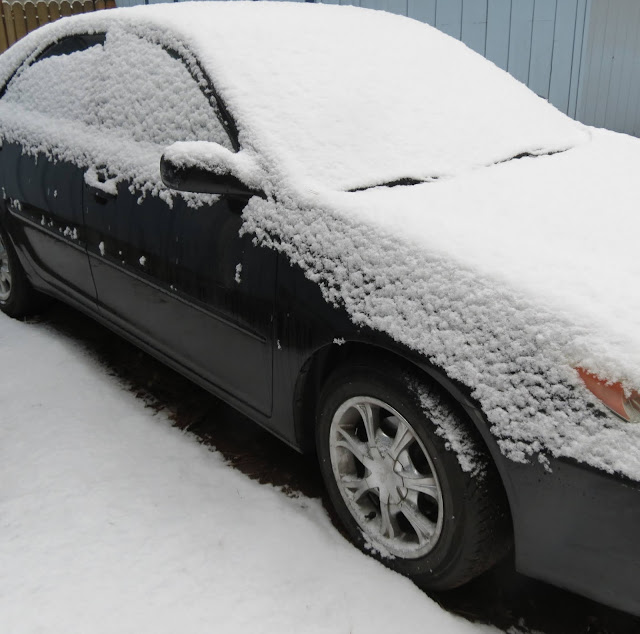 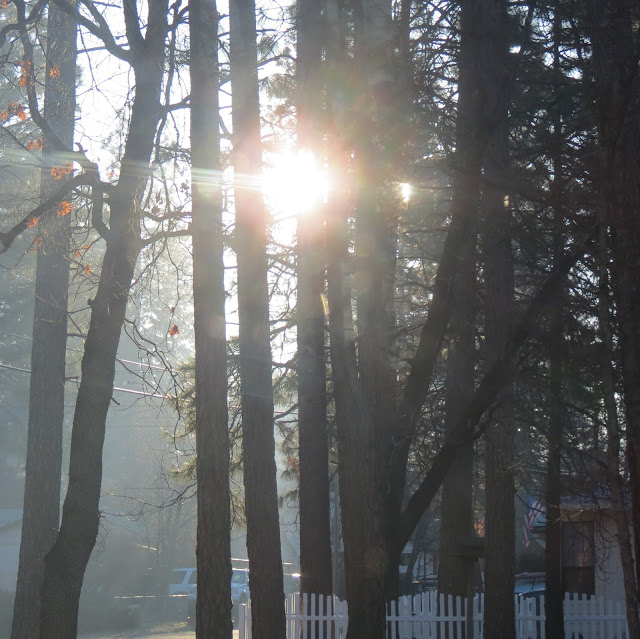 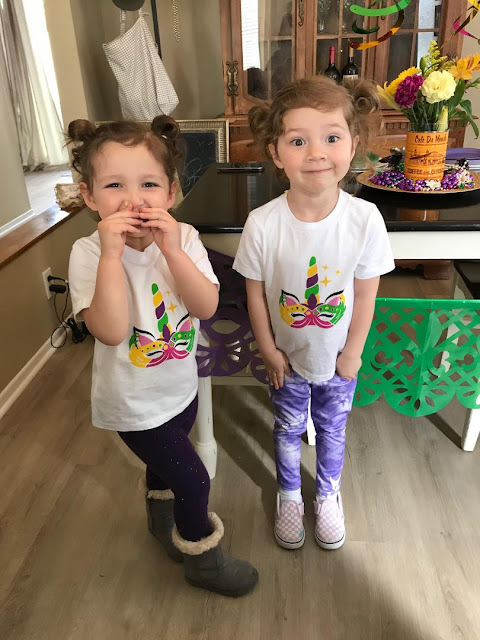 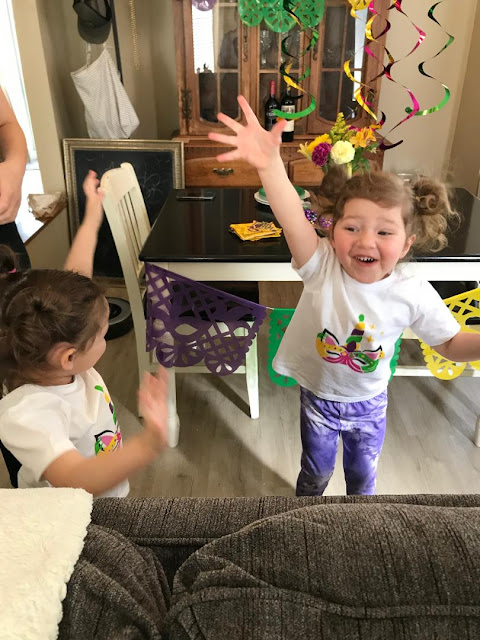 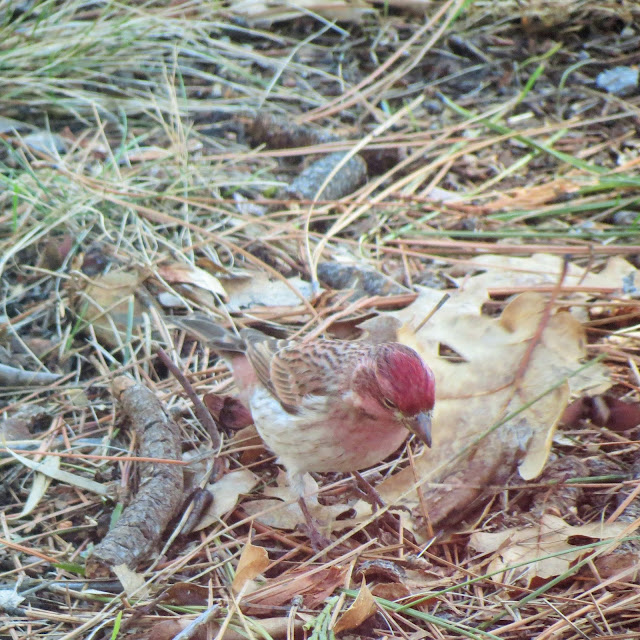 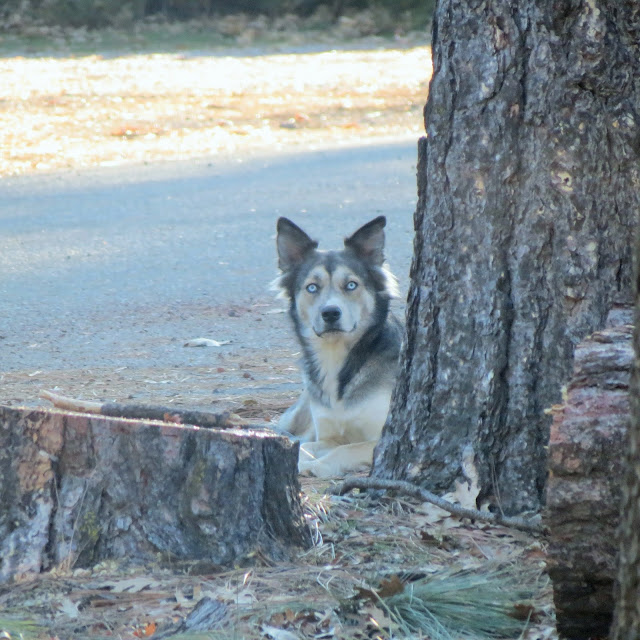 Here's the mountain that surrounds me.  Isn't it beautiful? 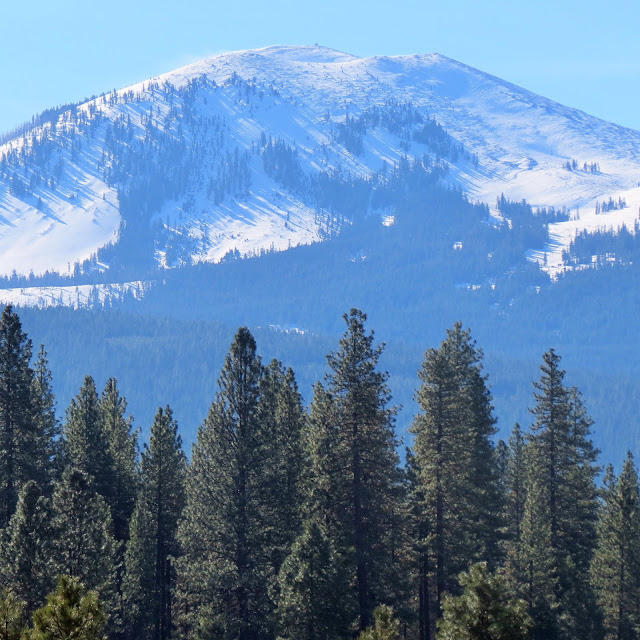 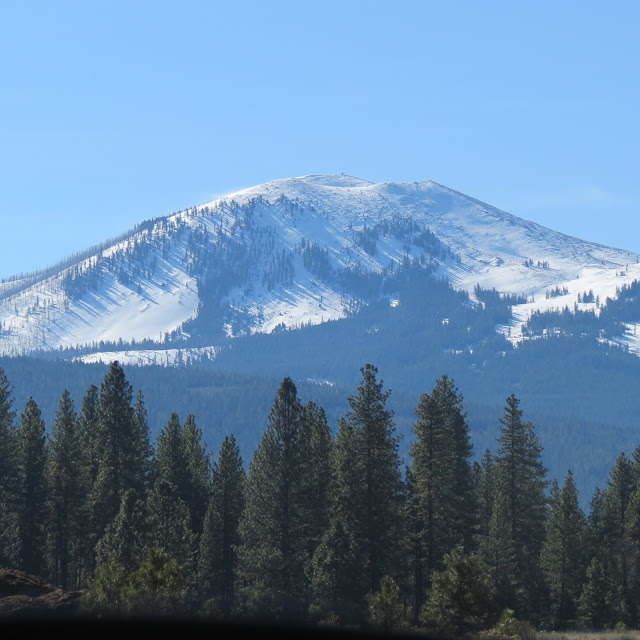 And this is the animal I hear in the distance!  He's from a cow farm a few miles down the road.  ; ) 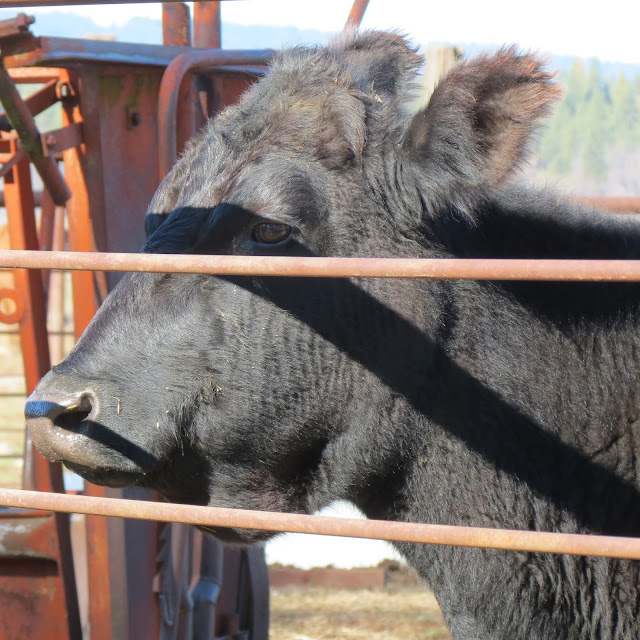 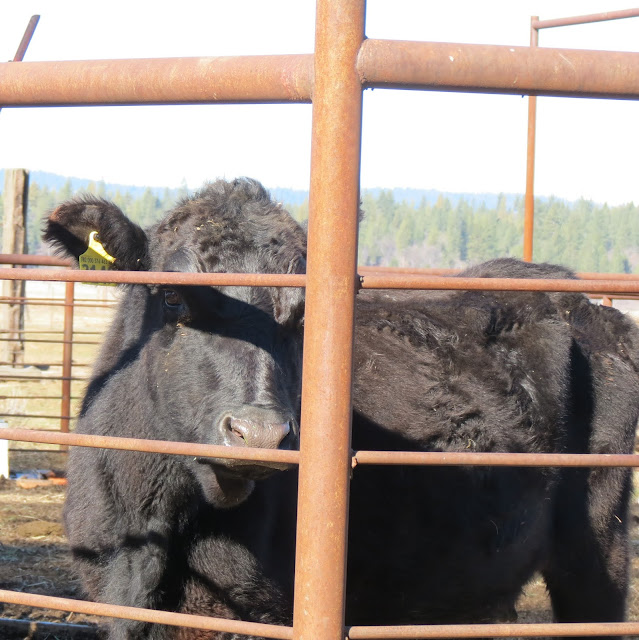 I am glad you are enjoying your mountain town.(-: We have cows on the ranch. They can be loud at times. Always entertaining that's for sure. It has been nice weather here. Suppose to get some rain later in the week I think. Enjoy your day!

Good morning, Sheri! Oh, what a breathtaking view!! Thank you for sharing it with us. I am so enjoying learning about your new home through your words and pictures. I love your mug and must begin again with some flavored teas. I go in spurts with tea! Love the Mardi Gras celebration! I did the same with my littles, and actually still do! Have a cozy day, my friend.

Beautiful photos and peach tea sounds, lovely! It’s lovely to have a farm that close, such a beautiful area, thank you for sharing this! Lots of happy faces, Mardi Gras isn’t something we are familiar with here in northern Canada but I love to hear about it, the festivities sound like so much fun and king cake, sounds great!

Well, that surprised me! A bull! I was thinking all sorts of rare animals it could be, finally settling on "I bet she is hearing a big bison." Nope! A big bull! They have the lung power, don't they? Your area is so lovely. I bet you will enjoy the coming spring immensely.

I'm so glad you are enjoying mountain life, it sounds amazing! The mountain that surrounds you is so beautiful. I love the little the Mardi Gras celebration, so cute. Kids do love to celebrate! Have a wonderful, peaceful week :)

Wonderful snowfall. Wow! The cows are nice. You have a wonderful place to live!

Hi Sheri,
I love how you are sharing your town with us and adventures.
I am excited to have you share all the seasons with us.
Have a great new week,
Carla

It is wonderful that you are so happy in your new home surrounded by woods and mountains. I love that you can hear the bull in the distance, you will enjoy learning the area and new places to eat and shop and walk and I look forward to you sharing here. Your granddaughters are cute in their matching shirts. Blessings to you in March.🌹❤️

Thank you, Lois, for following us. I appreciate that very much. : )

At least you know what it is now! And the mts are beautiful with the snow! Enjoy your week! stay warm!

Oh Sheri, that mountain is gorgeous! It's so humongous. Oh my, that makes the gently rolling hills of Massachusetts look really small. Wowsers. And the cow! What a sweet creature. Hope you have a great week, exploring your new digs. You are amazing. Hugs. Susan

Oh my. That's a bull? Not a cow? Guess I'm not to good at animal identification. hah ahhahaha

I became a fan of peach tea last summer; wonder where it has been all my life!:-) There are cattle at a farm not far from us, and we will sometimes hear one that appears to have strayed away from the usual herd. The snowfall is pretty. While we don’t follow the no meat Friday guidelines, I am prone to plan some kind of fish for Friday anyway. It’s good to be at peace when you have moved to a new area!

So happy you are at peace in your new location.
What mountain is that?
I love seeing your snow, but thankful my snow is gone and the sun is shining.
Now I will be waiting to find out what animal you are hearing. Maybe a donkey?
Cute grand daughters celebrating!

I love seeing snow in other's photos much more than my own! It's really lovely, Sheri. And that mountain of yours is spectacular. What a terrific view to be able to cherish every day.

Really WONDERFUL pictures!So glad you are glad!!! Thank you for sharing!

Sheri, it's so pretty in your mountain town. I can see why it is peaceful to you! All of your lovely photos made me smile. The snow covered mountain is spectacular. The grand girls are so cute and continuing to grow up so quickly. I'm glad to hear you have a farm nearby. We occasionally hear cows when the wind is blowing our way. Have a great week!

The girls precious and I bet they miss you.
You did get some snow - and was that a wolf or a dog?
It is very pretty and peaceful there I am glad you call it home.
Love peach tea, but I am from the peach state.
A cow - well that is unusual up in the mountains - which were beautiful!

SHERI! Isn't that lovely that you live in a place that is surrounded by such nature? Mountains, snow, ANIMALS!!!!!!!

I am happy to know that you are enjoying your life in this sweet place. Quiet, serene, totally for you.

Sheri,
You seem to be planted where you are supposed to be. Your pictures are delightful (oh those cuties) and your neck of the woods is gorgeous. Our grandson has cows. That was a surprise.

What a beautiful view! I'm glad you're enjoying the snow! Happy March Days!

What a peaceful and beautiful place to spend your days, and there is nothing more sweet than the smiles of children.
Beautiful post my friend
blessings,
Penny

Hi Sheri...you have snow here we have sun ...spring is comming...I wish we where out the lockdown...and we have no evening clock more....owww I wish everything was normal again....happy weekend love Ria 🍀💕🍀

Sheri I am so happy to see all your lovely photos of where you are living. It looks just perfect for you. Your wild animal looks surprisingly like ones that stand in my brother's field...you just never know when they will let out a bellow :)! Take care and have a blessed weekend. Hugs!

P.S. Has your snow melted yet? Our several inches has left and I am glad to see grass again. Can't wait until spring.

Congratulations on your win of the blog giveaway at the Merry Old Dame. Enjoy your beautiful goodies.

Sounds like you're settling in nicely into your new home, dear Sheri. The views are gorgeous and you have a LOT of snow.
Amalia
xo

I am glad you are content where you are...I would love seeing that mountain every day. Those girls are growing up way too quick! They sure are adorable.

Happy to hear you are happy in your new home and you are enjoying mountain life.

A cow?? Did you not know that sound? lol...I love the pics of the girls, they seem to have grown over night. I am so happy that you are at peace where you are living. Its a great feeling when you love where you are, you love what is all around you. Looks like a great place to walk and soak things in. AWESOME....can't wait to see some spring and summery pics as time goes by.

when i see them smiling my heart fills with joys and prays for them :)

images are artistic and awesome ,i could not figure out name of the animal though.
feeder bird images are excellent !
i am happy you found your peace in the lap of mountain dear Sheri :)
more blessings to you and loved ones!

Don't know how I missed your post??? The mountains where you moved are breathtaking. What a view. It looks charming in the snow. Picture perfect. Your granddaughters are positively adorable in their tee shirts. I'm tickled to hear that you drink peach tea. i now drink raspberry tea, cinnamon, african autumn or pumpkin spice. but for years prior drank peach. it soothes the soul. Take care.