Had a bad weekend.  No electricity and no water.  One was caused by the breaker box switch, and the other was a neighbor's septic problem.  And then some car maintenance stuff.  Let's just say it was an awful day and extreme heat. 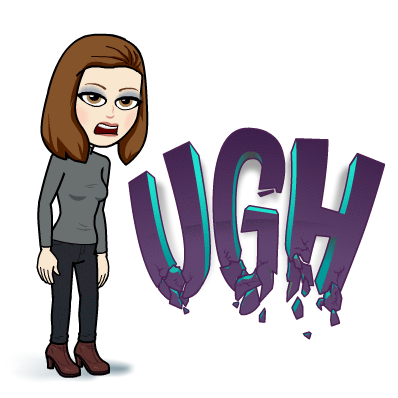 So let's talk about something nice.
I put out my first Fall decoration.   This glass pumpkin is one of my favorites. 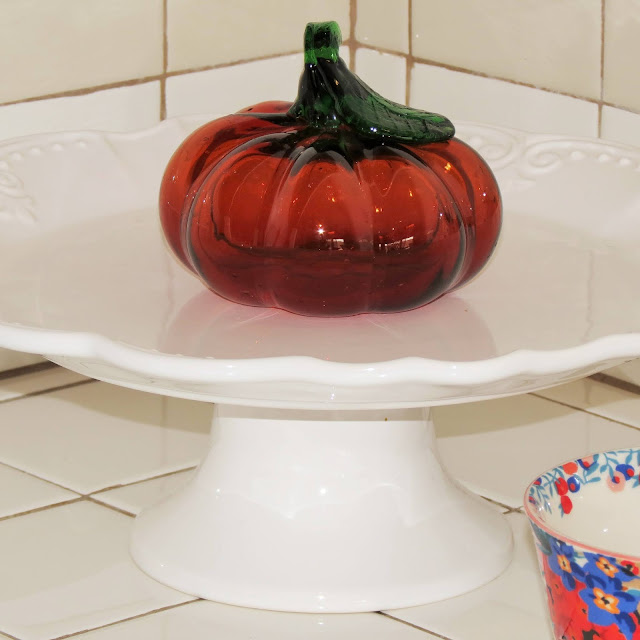 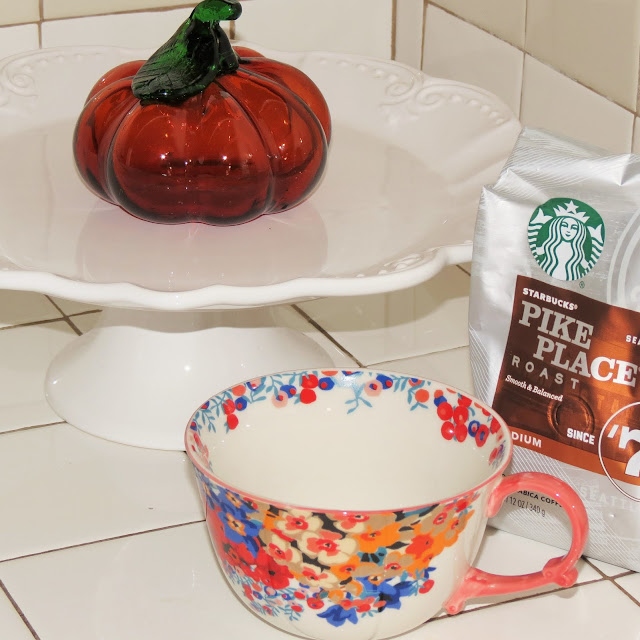 Let's put on some coffee.  I make mine with a single coffee filter, and it really makes the best hot coffee. 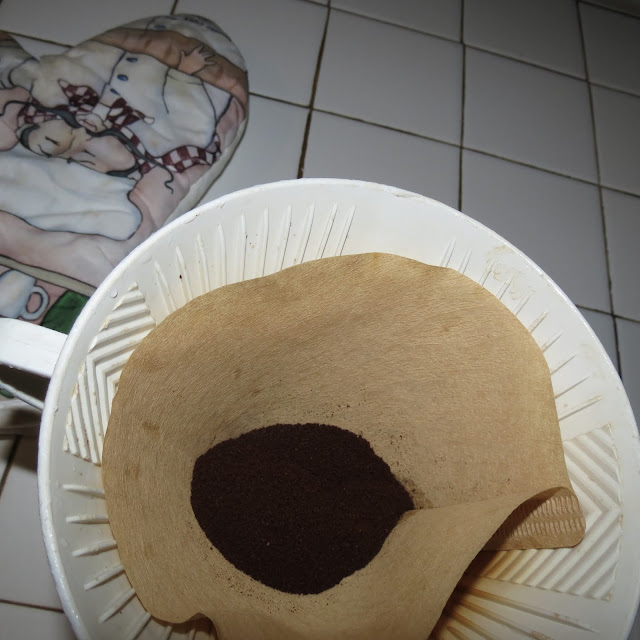 The new Fall goodies are out at Starbuck's, so I had to get a pumpkin scone.  I thought I'd heat it up myself so it was warm and tasty. 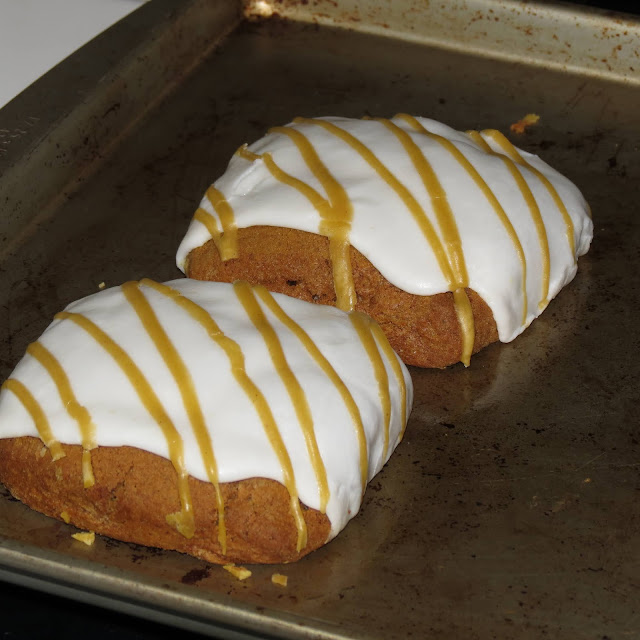 These are flowers outside my bedroom window.
Have any idea what they are?  They have the nicest scent. 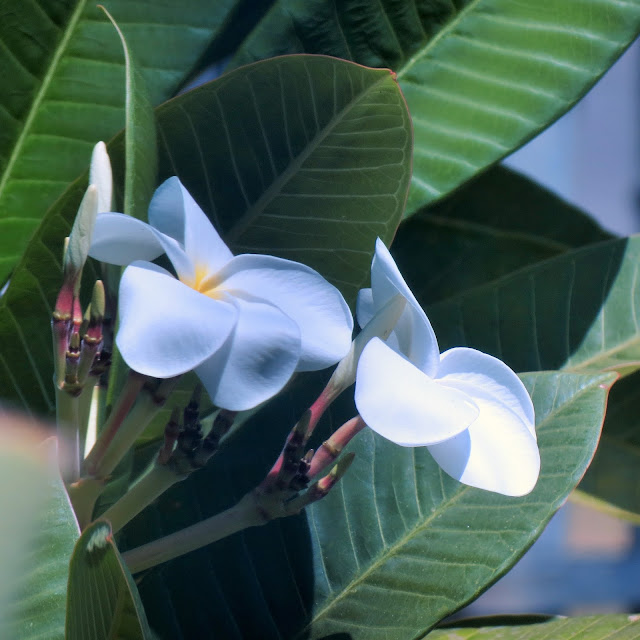 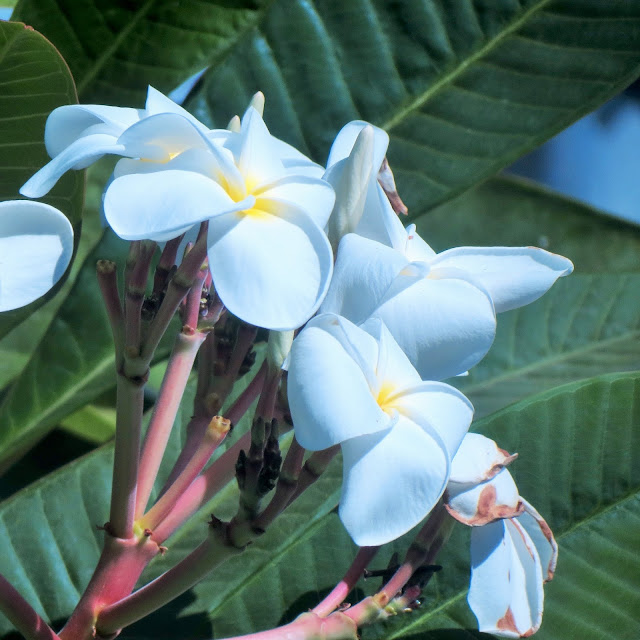 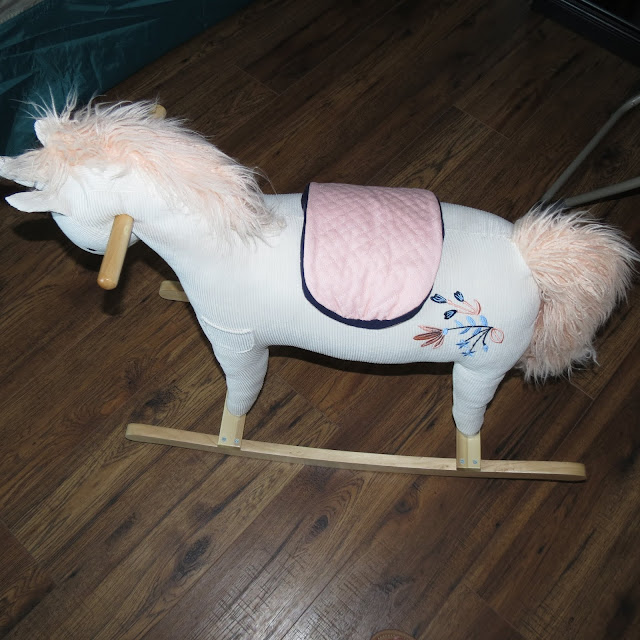 AMARANTHA sweet and fair, Ah, braid no more that shining hair! As my curious hand or eye Hovering round thee, let it fly! Let it fly as unconfined As its calm ravisher the wind, Who hath left his darling, th' East, To wanton o'er that spicy nest. Every tress must be confest, But neatly tangled at the best; Like a clue of golden thread Most excellently ravellèd. Do not then wind up that light In ribbands, and o'er cloud in night, Like the Sun in 's early ray; But shake your head, and scatter day!
~Richard Lovelace 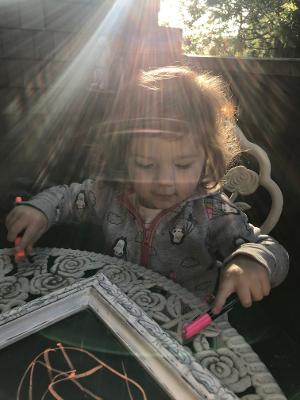 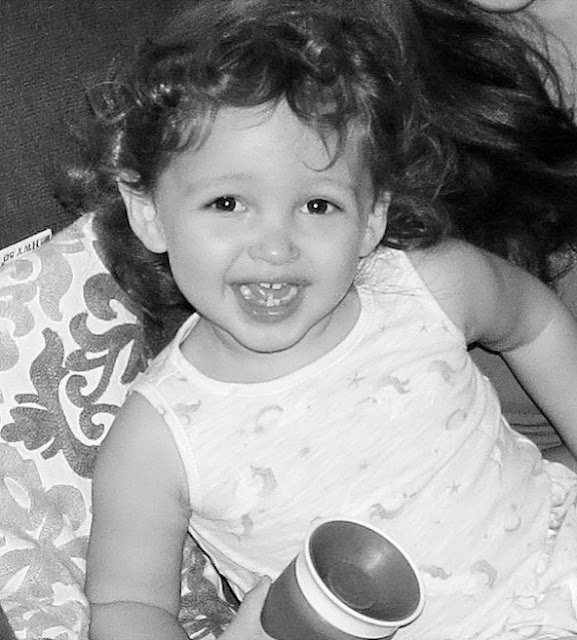 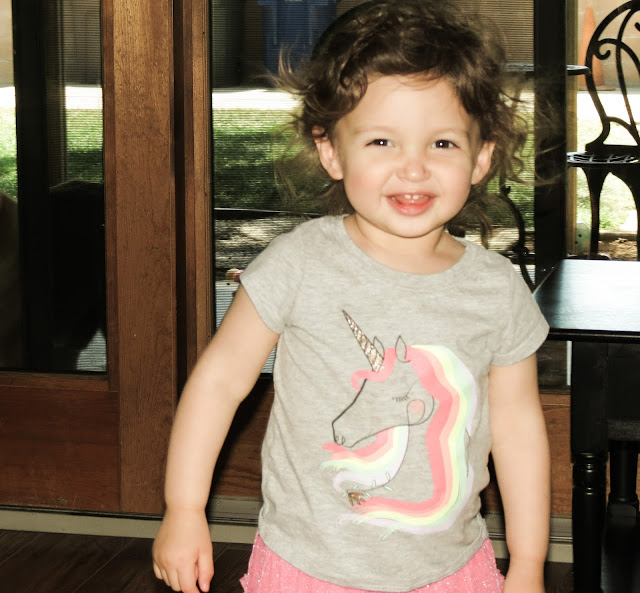 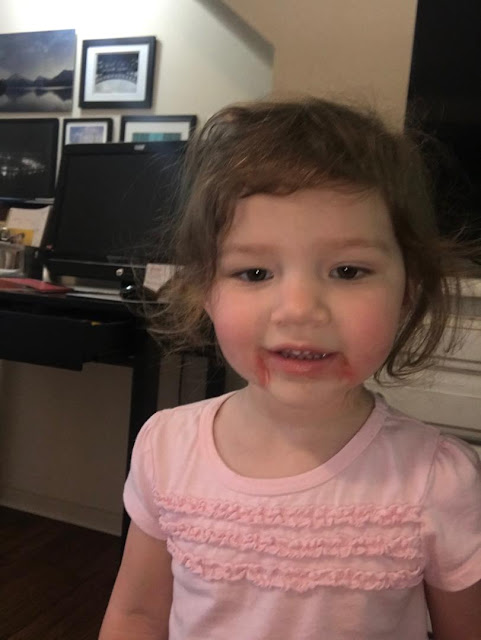 (Pictures of Francesca and Mia)

Have a sweet September week.

Your treat looks really yummy. The plant outside is a plumeria. I have one but it has never bloomed. I think it is to hot here. I do bring it inside in the winter. I'm sorry to hear of your water/electric and car troubles. I hate not having power/water etc. It has been so hot here and with all the smoke it is impossible to go outside. I wish it would rain. I hope your week goes better! Happy Labor Day!

I like Starbucks too. Man no electricity and water - bummer. I love your coffee or tea cup. Pumpkin too. We are finally going into the season I love - fall - and you are getting ready for it. I do hear it is HOT there tho. Mia is adorable and I am sure will be getting into her mom's make-up more and more. ☺
Well I hope things are looking up! Happy Labor Day!

That is a romantic poem and a darling child. Your scone looks like a delicious treat, and it is tough to be without electricity and water during a heat wave. We are in a heat wave too and poor air quality due to the nearby wildfires. It is a blessing to have fans when we need to close the windows. Enjoy that coffee and scone.

I've often thought it would be fun to live in the Little House on the Prairie Days, but a day without water and electricity showed me I couldn't do it. I like my comforts! So, I can really relate to your "no fun" day. I decorated for fall last weekend---when it was still August! That same day, I also had my first Starbucks fall drink. My daughter and I had gone to Barnes & Noble, and the Starbucks in there had signs advertising that fall drinks were now on the menu. Pumpkin spice latte---total yum!! That scone you had looks scrumptious.

Gorgeous Fall decoration!I do love that beautiful glass pumpkin.Your girls are adorable and cute.I also love plumerias and their delicious perfum.Here they also are called "jasmin-manga".I am sorry for your difficult weekend.I would love to know your daughter's macaron recipe,they are too expensive!Have a lovely week ahead. Xoxo.

That rocking horse is just the cutest...well that and the cute rider! Hope you have a better rest of the week my friend! Hugs...lots of Hugs!

I'm so glad you treated yourself after such a dreadful day. Life sometimes sends more than we can take. I love your sweet glass pumpkin you placed on the cake stand, Sheri. Fall is knocking on our door and I can't wait. We now are having cooler temperatures and lower humidity. Such darling photos of your sweet granddaughter, Mia. I'm not sure what the beautiful white blooming plant is, but it's gorgeous! Sending you wishes for a great week, my friend.

Hi Sheri, That flower is popular here in Brisbane - we call it frangipani. It has a beautiful perfume. What a rotten day you had - I hope you were able to go somewhere else until order was restored. Your glass pumpkin is beautiful - I do enjoy the Fall decorations seen in North America. People rarely decorate the seasons here. Your little granddaughters are the cutest! xx

Sending wishes for beautiful blessed days ahead. You are loved.

Oh it's so good to see you, Sheri!

As I open my blog roll every morning, I have to say I'm saddened to see that many blogs just aren't active anymore. I was wondering about you this morning and THERE YOU ARE. Thank you.

I also had wondered about you and your proximity to the fires. I have loved ones in many areas of California and I'm worried, as I can't seem to reach a few people. Please stay safe.

Well, here I am. It's the first day of school and I'm retired. I woke up with a smile then I started to think of the kids and how many of them will probably grow anxious about the virus. I am thinking about the colleagues whose lives are on the line and for those of us who left. Life is getting tricky.

That WAS a bad day. Well, you still managed to find much to love and I really loved that! Oh, that Mia is too cute!

Hi Sheri! Sounds like a terrible way to start the week. No water? Yikes! I'm happy to see you getting into the fall spirit. I have a glass pumpkin sort of like yours, I feel the need to start bringing a few things out of storage. And I need to try the pumpkin coffee! I'm a grandma so I know how precious yours are to you. Such bright spots in our day!

Good luck with the electricity and water!

Hi,
Oh goodness, when it rains it pours, is what my friend Marv always says. I hope all is up and running again.
Thank you for sharing the poem.
Carla
P.S. and for sharing those sweet girls. xx oo

The girls are o pretty! And just growing up so fast. I love that pumpkin. I don't know what the flowers are buthey are beauiful.

Oh, that does sound awful having no water or electricity. I would have driven around in my car just for the AC.

I commend you for getting your Fall decorations out. I haven't yet. Just not in the mood.

Sounds like one of those days that just keep getting worse. hope tomorrow is better. I am happy to discover your comment on my blog. I will follow you and please follow me. Your sweet little one is darling. And I love that glass pumpkin.

Looks like very good treats. The kind that makes everything alright in the world.

I have been trying to wait on the fall decorations until official first day of fall but I am losing my battle and put up my all door wreath,

May there be better days ahead.

I know that you enjoy watching those girls grow and grow.....they are adorable. Thanks for dropping by the blog the other day. I have gotten so horrible about getting around and saying hi to everyone. I have gotten hooked on a Butterscotch flavored coffee I am making at home. It was Michigan Cherry, now this. I also have a hazalnut cream I trade out with. I love the flavors. As for the Starbucks goodies, I need to jump in the car and go try them out. We all know i love the goodies. Sitting here on my deck with the two furs and I have finished up my coffee not I want one of your goodies!

No electricity and no water must have been awful on such a hot weekend like the Labor Day weekend. Now we have the blanket of smoke - Doomsday every day.

i loved this glass pumpkin it is so pretty ,cookies look absolutely delicious and yummy

your grand daughters are growing fast by the grace of lord !

they are super cute :)))
the image with sun rays passing over her is so beautifully taken :)
more happiness to you and your's my friend!

Dear friend I would have been pulling my hair out with all your weekend challenges. God bless you for putting together lovely photos and inspiring me to get some fall decorations out of storage. I am procrastinating because I am not wanting summer to go.😳 Take care - now I am going to read your latest post. Hugs

Sweet pictures of Francesca and Mia.
I have a similar cup from Anthropologie. Is your cup from there?
Nice poem. Glass pumpkins remind me of my cousins wife that just lost her home in the fires. She had a collection of them. I have been thinking when they rebuilt or settle somewhere I want to get her a glass pumpkin. They are the perfect decoration for Fall/Autumn.

Um, I love my coffee dripper too! That is the only way I make coffee these days. I did get myself the clever coffee dripper which I can brew and makes enough for a cold brew when I want it.

Hope you are gearing up to a wonderful fall. & the power stays on!