Some of you know that I love the Little House shows.  I just love that era and the simplicity that came with it.  Yes, they had their hardships, but at the same time, they were hard working, honest, and lived with goodness, always helping their fellow man.  One day, I was watching an episode called The Music Box. 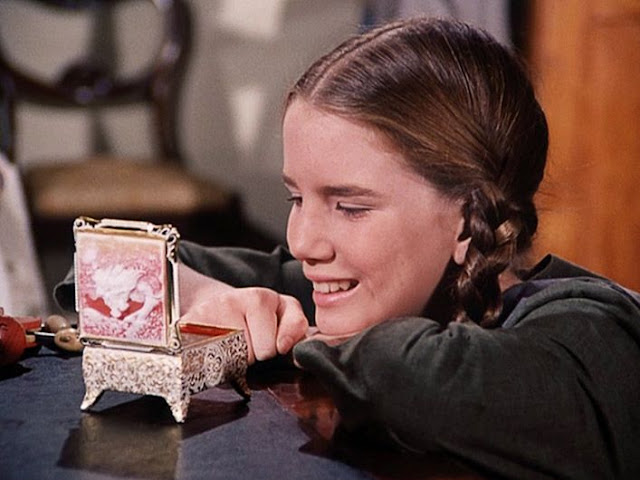 A few days later, I went to get my mail, and the Mother's Day gift I was waiting for from Mia had arrived.  When I opened it, I smiled and was surprised to see that it was a cute small music box. 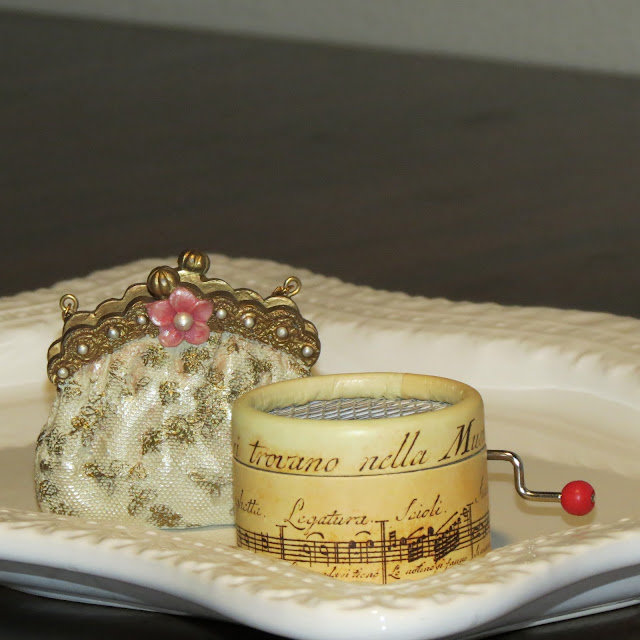 I loved the music it played, and thought it sounded so familiar, so I asked Nel.  She said, "don't you know what song that is?  It's La Vie En Rose!"  It really got to me, as this was one of the first songs we played on our blog when we first started (music was popular to play on blogs at that time).

She also sent me a dandelion thumbprint card, which her and Nel made together. 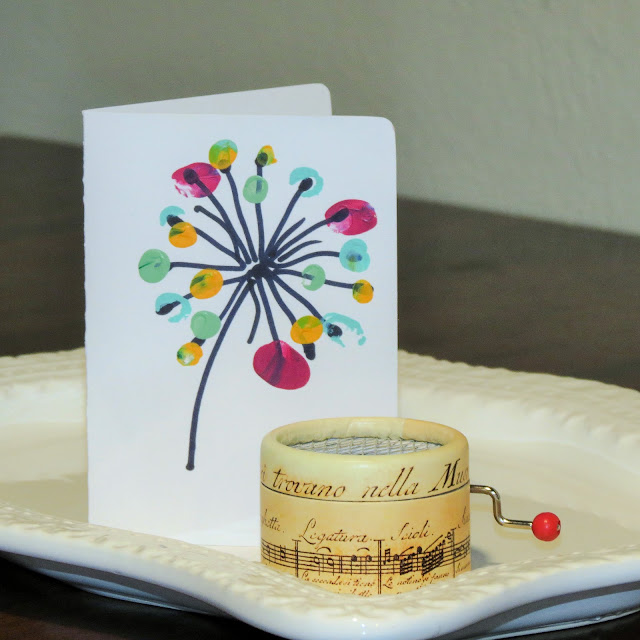 Special things always seem to happen when Mia is around. 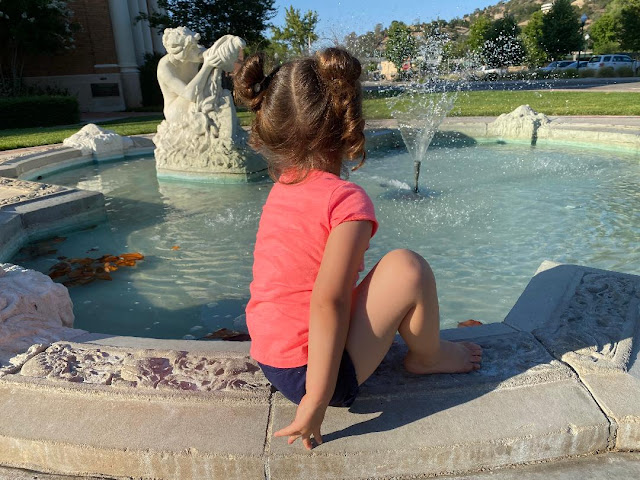 One day when I was in her room playing with her, she reached for something in her closet.  She couldn't get it, cause it was hanging high above from a hook.  It was a Rosary made with large colorful wooden beads.  She wanted to wear it, and I let her, but told her to be gentle with it.  You know, her great grandmother used to say the Rosary every day.  I think that's so special. 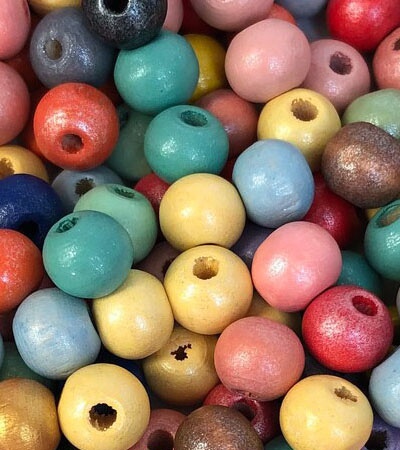 Another time, we were looking out the large front window at Nel's house, and I lifted her up on the window sill so she could see outside better.  Then, a white butterfly fluttered by, and we both stopped and gazed at it for awhile. 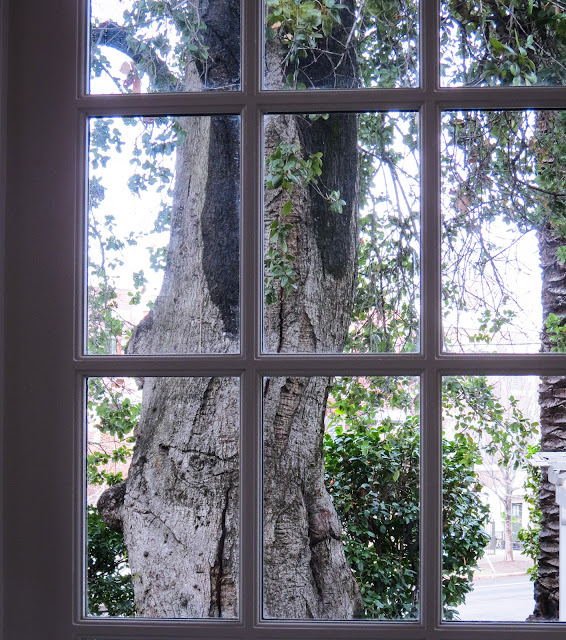 About a week later after receiving Mia's gift, I was watching the movie, Seven Years in Tibet, and in one of the last scenes, it showed him giving the music box to his son, which played the song, "Clair de Lune." 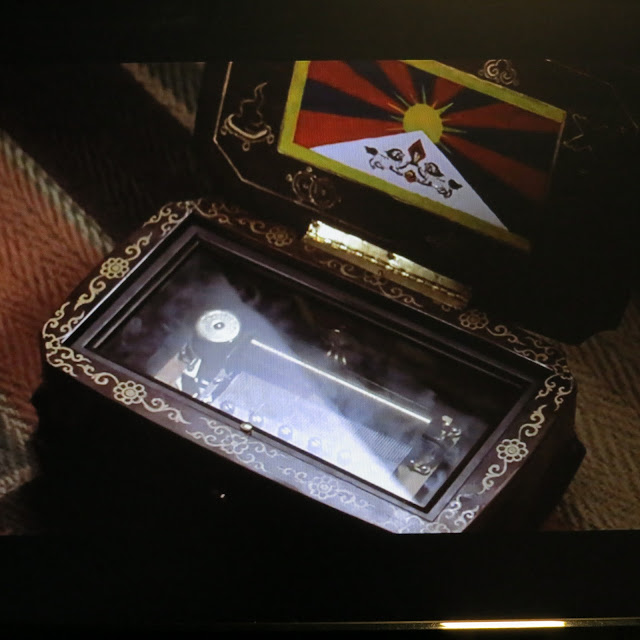 Thank you, Mia, for this little music box.  Every time I play it, I think of you. 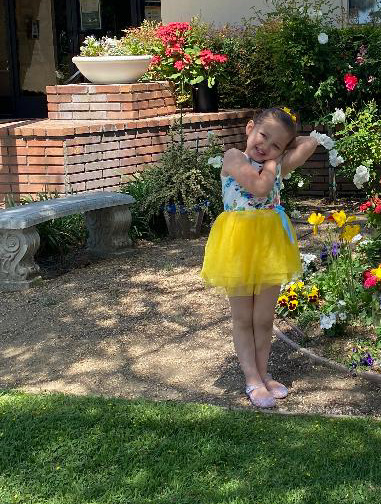 There's just something about a music box, ya know?

So special. What a gift

Precious Mia! What a special little sweetheart and gift.

A precious gift and story. The card is beautiful.

Mia is so beautiful and joyful! The music box is so lovely, and the thumbprint flower is wonderful, cheerful, and so well done. I really liked the Little House show. Hard to imagine that Little Bit is middle aged now!

That music box is adorable. How sweet was that? Daughters must be very nice to have. Not that I am bashing my sons, but they do not have that finesse that the daughters have, in connecting with their moms. With them, it would be a pair of tickets to a Giant baseball game!

Lol, I'm not complaining! That's special they want to include me with the guys!

I used to have a jewelry box I received as a teenager - It was from the TV show Dark Shadows and it was Josette's Music Box. I might still have it somewhere - I also have the little piano jewelry box that places music.

What an amazing gift, the joy it brings just keeps giving! 👍❤️

Oh yes, I love a music box, and have a small collection of them. They provide beautiful memories. I used to play Clair de Lune on the piano, back in the day when I practised :) Such a beautiful piece of music. Love the photo of Mia sitting on the fountain!

I still watch Little House on the Prairie. It's on many times a day here. That is so funny. There were hard times, but there was love and values.

I love your two music boxes and you will remember who gave them to you always.

It reminds me of a song - The Music Remembers When - I think by Harry Chapin.

So did Mia break the rosary? She is so cute.

Well we move tomorrow - the furniture and all!

What a special gift Sheri. I love music boxes too. White butterflies are special also. I believe they are visiting loved ones. Enjoy your music box!

Oh my dear Sheri, this is so sweet. Thank you for sharing this special post today. I have a Christmas Music box from my grandpa, I do treasure it as well.
Love to you!
Carla

I love how certain gifts remind you of the one who gave it to you forever. The music box is so beautiful and very special indeed. I love that wonderful card, too. YOu have such a beautiful relationship with your children and their little ones!

I love your music box story and remember that song well. I loved playing in on the piano. Enjoy your week!

I remember that episode. And I love your story! So beautiful. Thank you for always inspiring, my friend.

Lauren @ My Wonderfully Made said...

Uggg that is amazing! How beautiful and thoughtful - love that so much thought and love went into choosing these gifts and making that card! I adore that card - what a clever, creative idea. I'm going to tuck that idea away!

Oh yes, there is something special about a music box. I used to collect them in my early teens. My fave was a clear piano that placed one of my fave songs at that time, Laura's Theme from Doctor Zhivago. Somewhere along the line of life it got broken. Then once decided to clear out clutter in my life I got rid of the rest of mine. I love hot air balloons, had a tin one I loved. Anyway, I do love music boxes. That one Mia sent you will always be special for what it plays, cause it is from her and it plays a special ROSE song.

You will feel love every time you look at the music box...it was such a thoughtful gift.

What a wonderful gift and story ….love happy weekend from Leaf and me…🍀🐾💗🍀

Oh my goodness, such special, thoughtful gifts. A delightful post Sheri, thank you very much for sharing it with us. It will put a smile on my face for the rest of the day :)

What a very special gift to receive. I'm sure it filled your heart with gladness.

You are creating beautiful memories together, dear Sheri.
Amalia
xo

I love music boxes and I too have one that I actually bought for the case rather than for the music. It's an old one of a piano and I've used it for photography! LOL but this music box you are sharing has much more special meaning, given to you by someone who loves you forever.

Aw! Such a sweet surprise and a lovely keepsake. Music boxes are so special. I have one from my Mom. It's ceramic with scenes of the nutcracker all around and the wonderful song. She had taken all the 'girls' in the family to see the Nutcracker ballet in Seattle a couple of years before she passed away. Music boxes carry so many sweet memories. Your little Mia is so precious. Hugs to you xo K

Oh Sheri this post is right up my alley:)! I used to collect music boxes and figurines that played music. "Little House On The Prairie is the best show. Don't you just love Laura "half-pint"?? Mia is one special girl. You can tell she loves her Grammy. Enjoy your music box. Hugs!